South Africa’s entry into the high-profile BRICS bloc underscores its strategic importance as a gateway to the African continent. But can we compete with heavyweights like Brazil, Russia, India and China? And what about other nimble upstarts like Colombia and Vietnam? Katherine Graham investigates. In April 2011, South Africa was formally inducted into BRICS, an acronym first used by Goldman Sachs chairman Jim O’Neill in 2001 to describe the group of emerging countries that would dominate the global economic landscape by 2050. Covering more than a quarter of the world’s land surface and having more than 40% of its population, the BRICS are defined by their dynamism and fast-paced growth. From 2000 to 2009, for example, China, India and Russia had annual GDP growth of above 5%, while SA averaged 3.6% and Brazil 3.3%. Although originally grouped together because of their economic prowess, they have since emerged as a geopolitical force through high-level meetings, summits and various agreements. Added to this accolade was South Africa’s inclusion in another bloc, the so-called CIVETS (Colombia, Indonesia, Vietnam, Egypt, Turkey and SA). The Economist, which coined the term, believes that investor interest in BRICS is starting to wane and that the CIVETS are next in line to achieve emerging market superpower status. 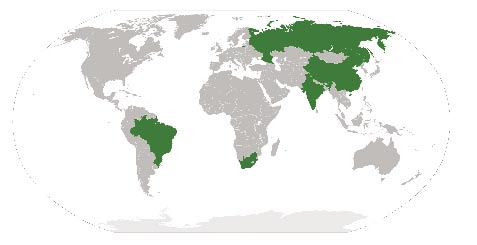 What does it mean for SA?

‘In itself, being part of BRICS or any grouping does not carry any substantial meaning,’ says Xhanti Payi, economist at Stanlib Asset Management. ‘What will be important are the strategic relationships we can form with these countries with regards to trade and investment.’ Adenaan Hardien, chief economist at Cadiz Asset Management, points to the relative size of SA. ‘South Africa is tiny compared to the other BRICS economies and more in line with the CIVETS,’ he says. Brazil’s share of the world total of GDP based on Purchasing Power Parity in September 2011 was 2.9%, India’s 5.5%, China’s 13.6% and South Africa’s 0.7%, according to the IMF’s World Economic Outlook. Adenaan continues: ‘The inclusion of SA in both these groupings provides potential in a number of different ways, including additional avenues to influence global policy and potential access to capital and markets. But how to quantify all this into rands is the difficulty.’ Anushuya Gounden, partner and head of the Africa desk for Deloitte, concurs. ‘The opportunity to attract foreign direct investment through association with the members of BRICS and CIVETS is significant and it remains to be seen how this opportunity will be leveraged,’ she says. ‘This is also a serious responsibility as SA is seen as a gateway to Africa, which represents over a billion people in 54 different countries.’ The fact that SA has been included with other BRICS is similarly reflected on our balance of payments. ‘According to the DTI, there is a growing share of BRICS in SA’s total trade,’ comments Gounden. This is led by China, which overtook the United States in 2010 as the country’s largest trading partner. ‘Exports to China rose from R40.2 billion in 2005 to R142.6 billion in 2010,’ she says. ‘In the same period, exports to the EU declined from 36% of the total to 28%.’ The association also has the potential to make SA more alluring for foreign investors, especially when it comes to greenfield investments. Says Adcorp economist and labour analyst Loane Sharp, ‘South Africa’s economic growth is the lowest of these countries, but a combination of development backlogs, strong private infrastructure, market-oriented policies and sound regulation is likely to raise our growth rates and attractiveness as a destination for international investment.’

Can we compete in the big league?

‘Our manufacturing sector has serious challenges in terms of competitiveness,’ states Hardien. ‘To the extent that our inclusion grants us greater access to developing markets, it is helpful. But I suspect that the benefit would be much greater if we were able to successfully achieve closer regional integration.’ Payi believes SA’s scorecard is mixed. ‘We are transparent in terms of government finances and management, with low debt levels. But in terms of manufacturing we are quite weak, particularly in terms of labour cost competitiveness and productivity.’ Gounden points to the praise SA has received for its well-developed capital markets and sound regulations, but adds, ‘The percentage of high-school graduates moving into tertiary education is an area where SA ranks lower among this group of emerging economies.’ ‘The country’s export potential has not been properly tapped,’ emphasises Sharp. ‘The manufacturing sector has been in decline for the past three decades. Labour productivity remains a key obstacle to export competitiveness, with much of SA’s manufacturing capacity involving automation as an alternative to labour.’

What are our weaknesses?

Aside from the obvious culprits like poverty and joblessness (currently at around 25%), the economy faces other structural constraints. ‘South Africa needs much higher levels of growth, both to compete against our peers and to make serious inroads into our key socio-economic challenges,’ asserts Hardien. Monetary policy is an area in which some commentators feel SA could be bolder. ‘Tight monetary policy fails to let the economy stretch its legs from a growth perspective,’ says Sharp. ‘This is a pronounced weakness.’ According to a July 2011 World Bank report on SA entitled Focus on Savings, Investment and Inclusive Growth, there are four impediments to higher economic growth: weak industrial competition, poor skills development, which prevents firms from expanding their business, contentious labour relations and a low savings rate. SA’s savings rate of 15% of GDP in 2007 fares dismally compared to India’s 34% and China’s 54%.

The report states that there are ‘no quick fixes’ to jumpstart the virtuous cycle of faster capital accumulation, job creation and technological advancement. ‘The quest for inclusive growth will require, above all, a significantly different mindset,’ it says. The report proposes a dual strategy – one inward and the other outward. ‘A big push is needed to better integrate the advanced economy and the less-developed economy,’ the authors state. ‘Faster growth will have to come from the less-developed economy, which has the potential to take off in the same way that other successful emerging market economies have.’ This would include public infrastructure spending and improving the technical skills of young people. The second push involves more effective integration with the global economy to unleash SA’s latent comparative advantages, the report says, particularly its two surplus endowments in natural resources and unemployed labour. ‘A clear, consistent and predictable strategy for attracting FDI will be important in this regard,’ it states. ‘Factory Southern Africa can underpin SA’s competitiveness in global markets, based on nimble “win-win” regional production supply chains.’ But economists like Sharp believe the government could be doing more. ‘Ultimately business profitability drives economic growth,’ he says. ‘Businesses obtaining higher returns use their retained income to invest, stimulating economic performance further. Some of our official growth plans do not take this into account enough. Regulation in education, healthcare, media, mining and other sectors sometimes has an anti-business or business-sceptic flavour. Government should create an enabling environment for businesses to be profitable, which will attract the investment necessary for growth.’ Joining BRICS also has other implications, asserts Payi, like trying to correct the yawning trade deficit between us and China. ‘SA has lost a lot of manufacturing to China,’ he comments. ‘There is now an opportunity to negotiate with China on issues like labour practices so that SA can compete on a fair basis. Leadership and diplomacy will be necessary, and we will have a lot to do internally to compete, including increasing productivity gains and resolving relations between labour and capital.’