“Sea Point was the place to hang out when we were younger,” my mother said nostalgically when I told her we were going to be spending a night at a hotel there. “That’s where we used to go to the movies and eat out. It was a very fashionable area in the Sixties.”
“Of course, rich people used to have one home in the southern suburbs and a holiday home in Sea Point,” my father enjoined.
It’s also, I realised after doing a quick search on the Internet, the most densely populated suburb in Cape Town. For me, Sea Point brings back memories of visits to Cape Town when I was a child. Staying at my aunt and uncle’s flat there was a holiday that was keenly anticipated, and resulted in treats like ice creams, buying Barbie doll horses and going to bed late at night. A lot has changed since then, but the area’s cosmopolitan appeal remains.
Our destination this weekend was Hôtel Le Vendôme, an elegant, understated boutique hotel in London Road. The car, as usual, was packed to the hilt which made it difficult for me to make a celebrity-style exit, especially since these days Mommy is confined to the back seat in case Samuel needs a bottle. We were welcomed into the hotel’s foyer, made all the more grand by the imposing Spanish chandelier.
The hotel, which has been around for 11 years, was last year bought by the United Arab Emirates-based Bin Otaiba Investment Group and management has ambitious expansion plans. First on the cards is a day spa, followed by an entire floor of executive clubrooms, a state-of-the-art gymnasium and a bistro-cum-bakery.
“French, very French,” Gavin muttered as we walked along the hotel’s corridors to get to our room. Indeed, the walls are adorned with Parisian scenes like the artists at Place du Tertre, the Eiffel Tower and the Louvre museum. It reminded me of the three months I spent near the French capital while au pairing, soaking up as much culture as I could while desperately missing Gavin. Today I’m still looking after babies – well, a baby – my own.
Speaking of which, it was time to break the bar fridge seal – no, not to crack open the champagne, but to stash away Samuel’s bottles and food. After a refreshingly delicious nap, we were ready to hit the promenade.
This is still the place to be seen if you live in Sea Point. It has incredible views of the Atlantic seaboard and Lion’s Head, plus it’s the ideal spot for parents to entertain bored tots thanks to the endless lawn and playground area. Samuel watched contentedly from his pram, while Daddy assessed the waves. “No, those are too small… Those ones are crumbling… Aha!” I knew what would follow. Which wife can resist the puppy-dog eyes of an eager surfer? I nodded my consent. With a broad smile, he disappeared in search of his board, and Samuel and I continued our walk.
Although the hotel does have its own restaurant, we opted to eat instead at the very popular Posticino, a lively Italian restaurant in Main Road. We were joined by friends who also have a young child, and we ate and made a merry mess of things together. Other new parents would understand.
Continuing the Italian theme, dessert came in the form of gelato. You’re spoilt for choice at Lecca il Gelato in Green Point. (The name, incidentally, means “Lick the ice cream”, but I love the fact that it also sounds like the Afrikaans word for “nice”.) The owners would no doubt think that “nice” is too bland a word to describe the flavours they concoct, and I would have to agree with them. I settled on pistachio and cappuccino; Gavin had a chocolate flavour which tasted like Ferrero Rocher and lemon sorbet, an interesting combination. 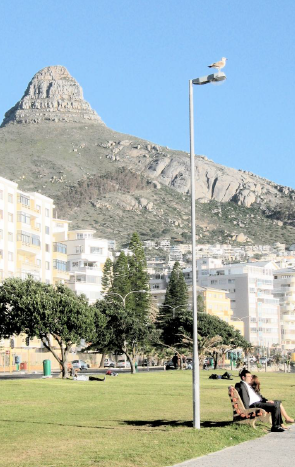 We were greeted again with an abondance de choix the next morning at breakfast. Everything from cereal, pine nuts, salmon, camembert and glazé figs were spread out for consumption. Samuel eyed one of his father’s croissants and proceeded to stuff the entire thing in his small mouth. We both sat about half a metre away from the edge of the table in order not to be held liable for broken china. (Samuel’s motor skills may not be that developed, but his persistence certainly is.)
When you think of Cape Town’s five-star establishments, Hôtel le Vendôme doesn’t immediately spring to mind in the same way that the Mount Nelson or Westin Grand do. But perhaps that’s a good thing – it’s a little gem tucked away unobtrusively in Sea Point. For those looking for a hotel with real European flair, this is it – plus the staff are very warm and attentive. For me, it was a good excuse to get away for the weekend and see the sea – something Capetonians don’t do enough. And for Gavin, it was stress-relief in the form of a surf. This time the board was carefully packed on the front seat, unlike our previous trip when it got left behind. Priorities, it would seem, remain priorities, regardless of whether you have a child or not.
For more information, visit www.le-vendome.co.za, e-mail reserve@le-vendome.co.za or phone 021 430 1200.