How to maximise your productivity 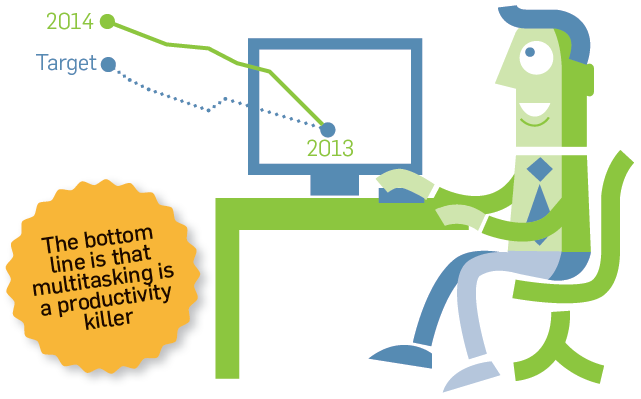 As a work-from-home mother, I know what it’s like trying to squeeze as much as possible into any given day. Sometimes it’s laughable how much I set out to achieve. I’m perpetually on a quest to be more productive, to feel the runner’s high of knowing I’ve ticked off all the tasks I had on my to-do list that particular day. Which is why I found this account I read on LinkedIn recently so fascinating.
Harvard economist Sendhil Mullainathan had an ‘Aha!’ moment one evening when he dropped his cell phone in the loo. He joined his friends for dinner afterwards and found that he had a surprisingly good time. His friends hadn’t become more interesting, nor was the food any better than usual. The simple truth was that he wasn’t having to check his phone for e-mails and text messages, meaning that he was able to enjoy himself more.
According to Mullainathan, who has written a book on scarcity, having too little time (a familiar refrain among business people) is not the problem. Having too little focus is. If you’re desperately thirsty, you won’t be able to concentrate on anything else. If you’re broke, you’re unlikely to be able to make sound decisions because you’ll be so worried about your financial affairs. Similarly, if you have too little time, you suffer from a lack of mental ‘bandwidth’, as Mullainathan puts it.
The brain can only process so much information, so doing too many tasks at the same time is not the way to be more productive. What changes has Mullainathan made since then? For one, he doesn’t have access to e-mails on his cell phone any more. Before a meeting, he tries not to read e-mails so he can focus better on the discussion he’s about to have.
It reminds me of a book I’ve been meaning to buy, Never Check E-mail in the Morning by Julie Morgenstern. Her advice is similar: choose what your most important task of the day is and tackle it before lunch. Your other work and meetings can occupy your time in the afternoon.
She also suggests scheduling escapes to eat and take a break so you can recharge your batteries. This is something I can attest to: once when I had a particularly stressful job, I really looked forward to my mid-shift breaks which allowed me to take a walk and catch my breath. It’s amazing how many ideas you have as you stroll back to the office.
The bottom line is that multi-tasking is a productivity killer. Stop starting new things and try to finish what’s already on your plate is the message of Morgenstern’s book. Control the ‘nibblers’, she says – perfectionism, procrastination, interruptions and meetings – and break big jobs into smaller chunks. And don’t be afraid to delegate.
My favourite piece of her advice? Shorten your working day, don’t lengthen it. Not only will your priorities become clearer, but because your time is more rare, you will use it more efficiently.