Putting the brakes on growth 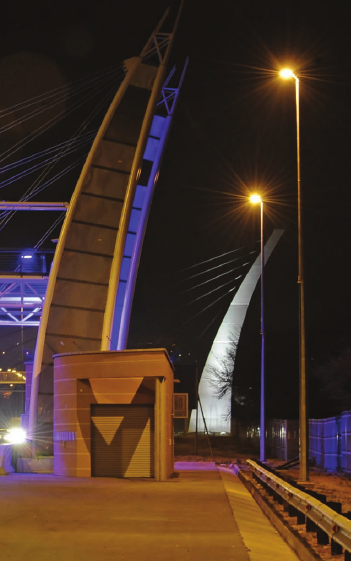 “Infrastructure can provide a competitive edge or it can be a limitation,” asserts Sam Amod, a consultant at the Engineering Council of SA. Taken as a whole, the country’s infrastructure – its roads, ports, rail networks, airports and energy grid – are not in bad shape. A report card done by the SA Institution of Civil Engineering (SAICE) in 2011 gave the country an overall rating of C–, meaning “satisfactory for now” (a B grade is “fit for the future, while “A” equates to “world class”). As the report concludes: “The focused investment over the past five years has resulted in more new infrastructure and an improvement in the condition of some existing assets. However, infrastructure at municipal level remains poor and is deteriorating in many places. Further, the resilience of all new and previoulsy existing infrastructure is questionable without a much improved commitment to maintainence.”
“South Africa’s infrastructure is still relatively good, but ageing,” comments Adenaan Hardien, an economist at Cadiz Asset Management. “Certainly, I do think that it is a significant dampener on growth potential and much needs to be done. Electricity is the easy example. But most areas of infrastructure suffer from neglect, as can be seen in the 2011 SAICE infrastructure report card.”
From a manufacturing perspective, years of neglect of rail infrastructure has seen roads being overloaded and eroded. This has had negative consequences for export manufacturing. Says Hardien: “Transportation, like energy and telecommunications, is critical to the process of production. A lack of investment in one area of transportation leads economic agents to explore other means, which may result in an overburdening of alternative infrastructure. These alternative forms of transport may also be more expensive and inefficient, which adds to the cost of production, thereby adversely impacting its competitiveness.”
Amod concurs: “Export manufacturing, as with most commercial activity, depends upon predictable, reliable and well-managed infrastructure. Some freight is suited to rail transportation, but will migrate to road if rail is unable to handle the demand, even if there is a cost premium. The problem is compounded when the road user disobeys the weight limits, as has been the case too often in SA, resulting in progressive damage to the road network and delays and increased transport costs. Undoubtedly this has an adverse impact on export competitiveness.”

According to the SAICE 2011 report, national roads, managed by the SA National Roads Agency Ltd (SANRAL), are in good shape and SANRAL’s management practices are in line with World Bank guidelines. Metropolitan roads are similarly in fairly good condition, but provincial roads require urgent repair. The report states that “well over half of these roads have exceeded their design life, rendering them highly susceptible to rapid, costly deterioration in many sections”. It goes on to say that a 2007 Department of Transport survey acknowledged that a lack of capacity in municipalities was retarding road maintenance and management. Of particular concern is the fact that road maintenance delayed for five years increases repair costs by between six and 18 times, apart from other direct and indirect costs.
As far as rail is concerned, the report is optimistic that this sector is improving. It says that since Transnet implemented its turnaround strategy in 2008 to achieve profitability and rid itself of high debt, it has been tackling the rail backlog in earnest. Transnet plans to invest R80.5 billion in the next five years, building on the R53.5 billion it has invested since 2005. But the report highlights the ageing fleet (the locomotive fleet is on average 30 years old, well above the industry norm of 16 to 20 years old). Although the two heavy-haul export freight lines – the iron ore line between Sishen and Saldanha and the coal line between Mpumalanga and Richards Bay – are of a high standard and well maintained, problems persist. “The declining state of rolling stock, lack of maintenance and underinvestment has resulted in Transnet losing market share to roads annually,” the report surmises. “Even its ambitious investment programme will do little to bring cargo back.”

Ports were given the thumbs up by the report card. “Even though much of the established port infrastructure (excluding Ngqura, a new port 20km from Port Elizabeth) is ageing, it is maintained in a operationally serviceable condition,” the authors say. “Generally, SA’s commercial port network is in good condition. It seems that port infrastructure is presently coping with demand and performing well against benchmarks.” Clearly the capital investment has paid off – Transnet spent R19.4 billion in 2009 on ports alone.

Getting a competitive edge

“It is not simply the physical infrastructure that matters,” emphasises Amod. “The policy environment, the management systems, skills and capacity which contribute to the entire network efficiency, all have a profound impact on competitiveness. By almost any measure, SA’s infrastructure capacity lags its economic requirements.”
A prime example would be the country’s dearth of engineers. “SA has, by proportion of population, up to twenty times fewer engineers than Australia, Western Europe and even India or China,” the SAICE report notes. Undoubtedly a shortage of skills and poor education system is as much a constraint on growth as the concrete limitations of the country’s infrastructure network. This can be countered by giving urgent attention to mathematics and physical science at schools and increasing the training and mentorship of young artisans, especially in the public sector.

The announcement in both President Jacob Zuma’s State of the Nation address and Finance Minister Pravin Gordhan’s budget speech that the state is planning massive infrastructure spending is heartening. The budget review lists 43 major infrastructure projects, totalling R3.2 trillion. Of the R845 billion in budgeted infrastructure plans for the next three years, almost R300 billion is in the energy sector, while R262 billion is in the transport and logistics sector.
Given the fact that only 68% of the money intended for large infrastructure projects was actually spent in the previous financial year, Gordhan announced several measures to boost the planning and monitoring capacity of departments and municipalities, threatening to cut funding should officials not spend it wisely.
‘‘Government recognises that the lack of infrastructure is a physical constraint to the expansion of our economy,’’ says Henk Langenhoven, chief economist at SEIFSA, the Steel and Engineering Industries’ Federation. ‘‘It has also recognised that a lack of financial and project management capacity within government is partly to blame for under-investment and under-spending in infrastructure. And it is acting to change this.’’

In order for infrastructure to be enhanced, a system needs to be in place for it to be maintained. According to the SAICE 2011 report, “A systems-based approach will enhance the integration of services and maximise the use of scarce human and infrastructural resources. It will also reduce the incidence of failure as constant data collection on condition allows early identification of acute and chronic weak points in the delivery chain.”
Of particular importance is life-cycle costing, especially when it comes to procurement. All too often the bid with the lowest capital price receives preference, which may mean significantly more expensive maintenance costs later on. Managing the upkeep of infrastructure should also be something that is done in a coordinated way across different government departments, given that the construction of a hospital, for example, may be jointly undertaken by both the Department of Public Works and the Department of Health.
Finding a sustainable model to keep the country’s infrastructure in good order doesn’t mean merely aping international best practice. Says Amod, “Many of the world’s most developed countries also struggle with infrastructure investment. Ultimately, the best model will be one that is developed by us for our own circumstances and will be sufficiently dynamic to deal with inevitable changes.”
And, if the success of the 2010 FIFA World Cup is anything to go by, it’s a goal that not only is worthwhile, but can realistically be achieved.