Meandering in the Valley 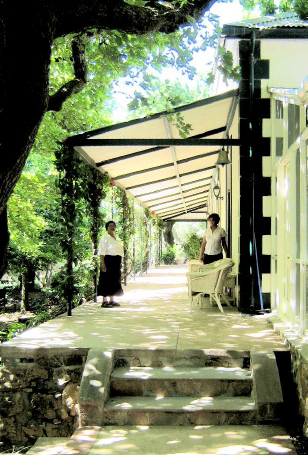 When I told a colleague who lives in Riebeek Kasteel that I was going there for the weekend, he replied: “Enjoy your time in the Valley.” When I phoned the owner of our guest house for directions when my husband Gavin and I got lost, she said, “Oh, you’re here. Welcome to the Valley.”

It seems locals are proud of their little town, situated an hour and a half from Cape Town, which for decades didn’t feature on the tourism map at all. Then in 2001 the first Riebeek Valley Olive Festival took place, and since then the dorpie has grown exponentially. Sandy Moolman, owner of the newly opened The Olive Grove, says that Riebeek Kasteel is now around two thirds bigger than it was in 2000. She says the town is a popular destination for functions, with venues like Groenrivier and wine estate Allesverloren catering for weddings and birthday parties. The weekend Gavin and I visited, there were two big functions on.

The town is an eclectic mix. There are earthy farm types (this is Swartland country, after all, the bread basket of South Africa), artistic hippies and upmarket weekenders (we defied the stereotype by being decidedly down-to-earth). On our arrival, we were met by a group of Gautengers who were also staying at the same guest house as us. Their stylish attire and forthright friendliness made them instantly recognisable. And no doubt the way we gawked at landmarks in the town made us seem conspicuous to locals. (Tip: they’re usually the ones walking around barefoot in the midday heat.)

After unloading our bags and unwinding at the Olive Grove, we headed for Café Felix, which was highly recommended by two sources. We were not disappointed. The cuisine was excellent and the prices, by Cape Town standards, refreshingly affordable. Gavin had the beef fillet with wild mushroom vinaigrette and pickled ginger mash for R115, while I chose the “Chinese takeaway” sweet and sour pork which was beautifully presented for R65. Chef Mynhardt Joubert regaled us with stories of his dancing days. There were two war injuries – the time he felt “warm liquid” engulf his foot during a performance at the Grahamstown Festival (he later discovered it was a nail that penetrated his tap dancing shoe) and the time in England when he reached into a crate to grab his costume, only to have a stagehand slam the lid on his thumb (it was taped up and he raced back onstage). The show, after all, must go on.

Interestingly, there are quite a few dramatic elements to the restaurant, including the fusion cuisine and the unusual décor. Café Felix is named after a black cat, which features prominently on a wall. Where is Felix, I enquired. We learned that the cat had a rather unfortunate encounter with a broom which sent him all the way back to his owner’s home in Simonstown. “He’s okay now,” the manager Eugene Nortjé assured us. “He’s just a bit squint.”

Though Felix was absent, there was plenty of feline company. The waitress told us there are six cats in total on the property. We met three, the most persistent of which was Julius. He looked up at us with beseeching eyes, and when Gavin finally gave in, he turned his nose up at our scraps. Clearly he has developed a rather sophisticated palate!

The next day, after my energetic husband returned from a run, we jumped into the Olive Grove’s plunge pool and enjoyed a very relaxed breakfast. Then it was time to explore the many interesting shops that Riebeek Kasteel has to offer. The trendy Short Street Mall opposite the Royal Hotel is worth a visit, but it was the unique charm of Garden Bleu and Aitsa on the Main Road that really impressed us. Garden Bleu is not just an Accessorize! for your garden – it has real character. Whether it’s metal crosses with barbed wire, beautifully crafted furniture or a wicker food cover for al fresco dining, you’ll find it here. Aitsa is for those with a sweet tooth, a home industry shop with lots of character. There are gingerbread men, koeksusters and fashionable knitted wear for babies (don’t worry – it doesn’t look like something your granny made).

Other places of interest include the Cape Francolin, which sells art, bric-a-brac and “double density” strawberry jam for R15, and the Olive Boutique, which not only sells edible products but also lovely lotions and balms. We walked off with a small slab of chocolate olive salami, which tasted a lot like Christmas cake. 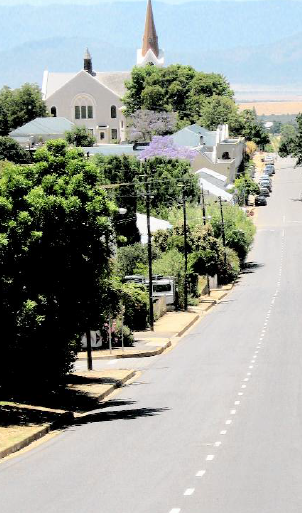 We were quite content to skip lunch because we knew a scrumptious high tea awaited us in Bartholomeus Klip. I had been told this country retreat which was once a grand Victorian farm house deserved a visit, so Gavin and I travelled past Hermon to get there. Another guest put it succinctly when he exclaimed, “Who would have thought this amazing place existed in the middle of nowhere?”

Situated on a working wheat and sheep farm, Bartholomeus Klip also boasts a 4 000-hectare nature reserve. Our guide André Claasen told us that it’s the only spot in the world where you’ll find the geometric tortoise, the second most endangered tortoise in the world, as well as several types of flora, such as the candelabra lily and the dagger leaf sugarbush. Guests get to go on game drives, but you’re unlikely to spot any elephants, rhinos or lions here. Instead you might see black wildebeest, gemsbok or eland, or if you’re really fortunate, leopard, caracal or bat-eared foxes. One of the Big Five that is hard to miss is the reserve’s herd of buffalo: they’re part of a breeding project which produces disease-free buffalo (most of South Africa’s buffalo, we learned, have TB).

Although we were sorely tempted to stay a bit longer for a dip in the pool, we decided instead to hit the road. Driving past the recently harvested wheat fields, it was easy to understand the attraction this area has for artists and tourists alike. We had experienced a small taste of what the Swartland has to offer, and – God willing – we would be back again for more.