O’s Five-Point Plan to … Being Fortunate 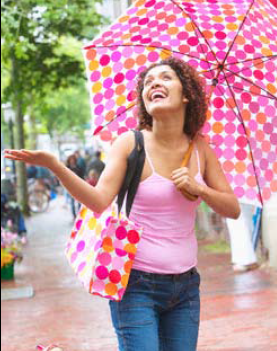 Listen to your gut.

Being in tune with your intuition will help you make more effective decisions, a key characteristic of lucky people. “Often we’re so immersed in our feelings or in our practical workday that we just mow over the top of our gut feelings,” says Cape Town-based psychotherapist and executive coach Mary Ovenstone. “But it’s important to be connected to your deep, inner voice. Gut feelings are where emotions and logic come together.” By listening to your intuition, you’re drawing from a font of knowledge you’ve built up over your lifetime.

Hope for the best.

Our expectations – whether good or bad – clearly affect the final outcome. Lucky people are convinced the future is bright, Dr Wiseman asserts, which becomes a self-fulfilling propehcy. The opposite is true of unlucky people. “Unlucky people are stuck in routines,” he says. “When they see something new, they want no part of it.” Having an optimistic attitude helps us to try something new, to persist in the face of failure and to interact more meaningfully with others.

“The very idea of blaming your situation on bad luck is problematic,” says Ovenstone. “It implies that something bad is happening to you, whereas in reality it has emerged from within you.” Instead of bemoaning your fate, you need to articulate the problem and develop a positive response to it. In this way, you’ll be turning “bad luck” into “good luck”. For example, don’t dwell on your ill fortune. Imagine how things could have been worse and take control of the situation. As Ovenstone puts it: “Find the window of opportunity in the middle of the wall of blockage.”

Who can forget that quote by Gary Player? An onlooker watched him knocking balls in a Texan bunker where he hit successive holes in one. The man exclaimed, “I’ve never seen anyone so lucky in my life!” To which Player retorted, “The harder I practise, the luckier I get.” Bottom line – you need to work hard so that when luck does come your way, you’re ready to make the most of it. Many scholars described Mozart as a child prodigy, but from the time he started playing music as a four year old until his genius was recognised at age seven, he put in many thousands of hours of practice. If luck is being at the right place at the right time, then it’s important you’re prepared when it strikes. Frank Sinatra once remarked, “Luck is only important in so far as getting the chance to sell yourself at the right moment. After that, you’ve got to have talent and know how to use it.”

Oprah May 2010 Five-point plan to being fortunate