Half empty or half full 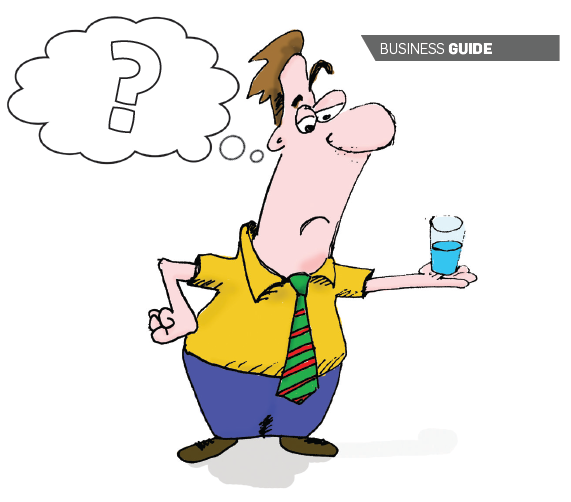 It’s a phenomenon that was first demonstrated by researcher Neil Weinstein in 1980. The university students he interviewed shared this in common: they all believed the odds of bad things happening to them – such as divorce or having a drinking problem – were less than for others, while their odds of experiencing good things – owning their own home and living past the age of 80 – were greater.
Call it unrealistic expectations or an illusion of invulnerability, there’s no doubt that this is a powerful psychological force. If you don’t think you’re at risk for heart disease, you’re less likely to go for regular checkups or change your lifestyle. If you don’t think you’ll ever get skin cancer, you’re unlikely to smear yourself with sunscreen in the morning. Your perception of risk is distorted.
It isn’t hard to see how this theory relates to investing. ‘The very nature of investing tends towards optimism bias,’ says Tim Dearden, CFO of Vena Solutions. ‘When your stock goes down, do you ‘double down’ and buy more or do you keep your position in spite of changes in economic circumstances?’ Dearden believes often investors may have an emotional attachment to a stock instead of being truly disciplined by having a stop-loss or hedging strategy that allows them to admit their mistake and move on.
Optimism bias is such a reality among investors that financial planner Kim Potgieter of Chartered Wealth Solutions has started doing personality assessments on her new clients. ‘A motivator has a more optimistic personality and is more influenced by how the markets are performing at the time,’ she comments. ‘On the other hand, the analytical personality type is always more cautious, anticipating the worst.’
Is there really no difference between investors and the Saturday afternoon queue of people waiting to buy their Lotto ticket? Perhaps, if you’re slightly pessimistic. Here’s a frightening illustration given by Marriott CEO Simon Pearse: ‘If we were to look back 15 years, it is unlikely that we would have found anyone who would have said that the equity markets in the US, the UK, Europe or Japan would not have increased in value by now. The reality is that these markets have been static for a decade and a half.’
Eina! And what about domestic markets? In the SA unit trust industry, which represents some two million investors and 473 000 accounts in general equity funds, returns in the past decade have been far from impressive. Says Pearse, ‘In the ten years to December 2012, only 28% of the accounts outperformed the average and 72% showed a return below the average.’ Why? Quite simply, the poorest performing funds were the best performers over the 10-year period 1997 to 2007, causing many investors to have chosen these funds.
So how do we filter out this pesky tendency to be over-optimistic? Good news for the mildly depressed (and those seasonly affected by winter blues) is that this is a good frame of mind for investing. ‘People who are mildly depressed are in a better position to make investment decisions because they are more able to see reality for what it is, warts and all,’ explains Pearse.
As always, stay clear of the potholes. ‘Avoid stocks that are priced for aggressive growth in order not to suffer the capital losses incurred when the over-optimistic pricing unwinds, as it inevitably does,’ advises Nedbank Private Wealth economist Madalet Sessions. ‘Buying a diversified portfolio of shares, exposed to different geographies, business models and growth prospects, is the best strategy for earning appropriate risk-adjusted returns from your investments.’