Top of the Emerald Isle 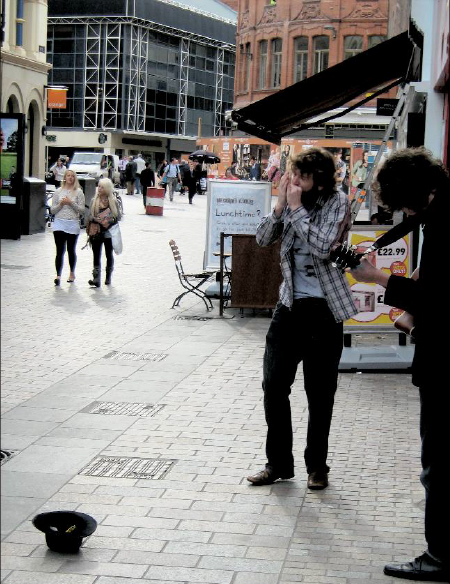 Quick question: How do you know whether you’re in Northern Ireland, which is part of the UK, or the Republic of Ireland? Answer: You don’t (generally), unless you can read the roadsigns which are in kilometres in the south and miles in the north. Or, if you spot a petrol price, it’ll be in euros in the south and pounds in the north. The rest of the time you drive seamlessly between the two, taking in the Irish countryside patchwork of green hills, dappled light, well-fed sheep and the occasional ruin.

The first stop on my whistlestop tour of the northern and western reaches of Ireland (which includes both the Republic of Ireland and Northern Ireland) was Belfast. I’d been here before, and was eager to explore this cosmopolitan city a bit more. Belfast has the dubious honour of being the home of the Titanic, but has recently won fame as being one of Europe’s most desirable, cultural and chic destinations. We stayed in Queen’s Quarter, a fashionable area near Queen’s University, and had dinner at Shu, situated along the trendy Lisburn Road. To work up an appetite first, we walked Belfast flat, peering into the curious Entries and stopping to admire buskers along the pedestrianised roads. The Entries date back to the 17th century and are the narrow streets and arcades that connect the main shopping areas of Belfast.

A top priority for my companion Nikki was to locate the Crown’s Bar. It’s famous for being one of the finest examples of a Victorian gin palace and features elaborate tiling, stainglass and woodwork which was done by moonlighting Italian craftsmen. Most appealing of all to Nikki were the snugs, the cosy booths where you could put down your shopping bags and have a pint of Guinness or two.

We also popped our heads into the Belfast City Hall, which will amaze Durbanites because their town hall is an exact replica of this one, a neoclassical Edwardian masterpiece. The Albert Memorial Clock is also worth a visit. Built in 1865 on reclaimed land from the River Lagan, this is Belfast’s own leaning tower of Pisa. As locals put it, ‘The Albert not only has the time, but also the inclination.’

Leaving Belfast the following day, Nikki took charge planning our route northwards. A freelance food writer, she took the tagline of Tourism Ireland (‘Go where Ireland takes you’) to heart, except that she reinterpreted it to mean: ‘Go where

We also got to chat to the owner, Robert Ditty, who is the artisan baker responsible for the world-famous oatcakes and swears that the Irish invented them, not the Scots. He inherited the business from his parents in the 1970s and has been running it ever since, using local produce and organic ingredients as much as possible. I’m no gourmand, but these oatcakes were definitely less sweet and more wholesome-tasting than the oatcakes I’m used it. Robert says it’s the buttermilk that gives them their distinctive flavour.

En route to Portrush following the Causeway Coastal Route, we encountered a slight problem: a giant puddle blocking the road. The rain in Ireland is a constant fact of life, never far away and often so light that you barely notice it. But clearly it had rained enough in the past few hours to make the road impassable. Encouraged by the sight of a bus ploughing through the knee-deep puddle, I was on the verge of braving it myself when a local flagged us down, only to tell us that the last people who had attempted to cross were two tourists who were sitting in his house. Needless to say, their rented car had blown a gasket or two and they were left stranded. We chose another route and decided to stretch our legs at the picturesque seaside town of Portrush.

Our stop for the night was in Derry, also known as Londonderry. You soon realise that whichever name you choose to call it has political implications. This was one of the hotspots of the Troubles, the period in the 1960s to 1990s when violence between Loyalists and Republicans flared up in Northern Ireland. If you’re hoping to understand the history of the area a bit more, two museums are worth a visit: the Tower Museum, located within the city’s historic walls, as well as the Museum of Free Derry, which is a veritable assault on your senses, but nevertheless gives an excellent overview of the nature of Ireland’s recent fractured past. It’s located in the Bogside, where murals depict the conflict in a larger-than-life way amidst the working-class terraced houses.

Our next stop was Lissadell House near the coastal town of Sligo. The birthplace of Constance Markievicz, one of the leaders of the 1916 Easter Rising, the house was also a favourite retreat for the poet William Butler Yeats. Horticulturalists will love the alpine garden as well as the Victorian walled garden which is a feast of colour and boasts unusual varieties of vegetables. You’ll be pleased to know that most of the ingredients for the quiche and salad you tuck into for lunch all come from this garden, too.

Our visit to Sligo coincided with the celebration of Arthur’s Day on 23 September (any excuse for a pint, as one Irishman put it). We pulled into Hargadon’s for some of the black stout that made Mr Guinness famous. If his wife had 21 children, I reasoned, having half a pint couldn’t be too bad for my pregnant belly, now could it?

More festivities awaited us in Clifden in Connemara, a coastal area that features some breathtaking scenery. The Clifden Arts Festival was in full swing, and we flitted from pub to pub sampling the live music and Irish dancing. The owner of the guesthouse we stayed in, Buttermilk Lodge, even shared her time-honoured porter cake recipe with us. The secret ingredient? Just over a cup of Guinness, of course.

But the animated scene in Clifden was just a foretaste of what we would encounter in Galway. We arrived in time for the city’s annual Oyster Festival, complete with street performers, musicians, a brass band and hordes of visitors. The highlight of the day’s events was the Guinness World Oyster Opening Championship. Watching entrants from different countries shucking their way through 30 oysters was quite a spectacle. This year it was Sweden’s candidate, Johan Malm, who ended up taking the crown.

The following day we chatted to Michael Moran, who was still licking his wounds after being placed second in the competition. But he had no time for self-pity. His restaurant, Moran’s Oyster Cottage, situated in Kilcolgan, just outside Galway, was packed as usual for lunch and we had the privilege of sampling some of his seafood chowder, a recipe which has been in the family for seven generations, as well as crab meat and mussels. This is a seafood lover’s paradise and you can understand why the cuisine prompted Seamus Heaney to write a poem in the restaurant’s honour. It’s the perfect spot to indulge in Galway Bay oysters, which Heaney describes as ‘the frond-lipped, brine-stung/ Glut of privilege’.

Returning to Dublin, we realised our trip had come to an end. I had enjoyed more smoked salmon in the past week than in the entire year before. But more importantly, I left with a sense that I had experienced more of the soul of Ireland through the wonderful lilting music that lifts your spirits and makes your heart dance. God willing, I’ll be back again for more.