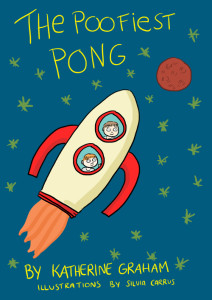 I may have just penned a book called The Poofiest Pong, but trust me, farting was something that was frowned upon in our family. My father comes from good English stock, so I suppose the concept of passing air was, from a Victorian perspective, simply not polite conversation. If one of us kids ever picked up a yucky smell in the car, crying, “Ewh! Who farted?”, my father always used to say, “Jakkals ruik sy eie stert”, which translated from Afrikaans means, “Fox smells his own hole” (a common refrain of my husband’s). Simply put, it means if you make a big stink about a fart, chances are it came from your own bottom. That was usually enough to silence our howls and protestations.

So I blithely passed through my childhood and teenage years with nary a fart within windshot. Actually, that’s not quite true. We had a Doberman named Rudi and he did fart quite often. Ripe, juicy Epol farts they were, and it was quite useful having him as a scapegoat when you did occasionally baff at the dinner table. “Sies, Rudi!” you would chide, and Rudi would look up sheepishly from his spot curled up at the bottom of the stairs before drifting back into doggy dreams. 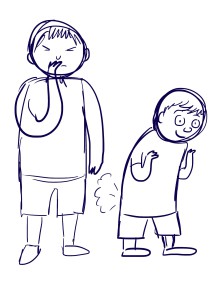 But coming back to the end of my teenage years, it was only at university that the world of farters opened up to me. I had a friend (who shall remain nameless) who was the only girl in a family of three boys and had picked up some unpleasant habits along the way, one of which was farting. She was quite unashamed about it and would often let rip. Her usual excuse was, “It just slipped out,” which I couldn’t quite believe, but then she did drink quite a lot, even by Rhodes University standards. Her favourite tipple was beer mixed with cider, known as snake bite, and she had a soft spot for droewors. It proved to be a potent combination and produced the most revolting stinkers.

Farts faded again from memory when I started working at the age of 21 and it was only when I met my future husband that I became reimmersed in the wonderful world of baffs. Now without being disrespectful to my amazing spouse, I must just say in his defence that he is a Graham and this Scottish clan are famous for their farts. Graham pongs really are eye-wateringly bad. In fact, so strong is the gene that both my boys are endowed with the same ability to make your toes curl with their farts, especially my youngest son. 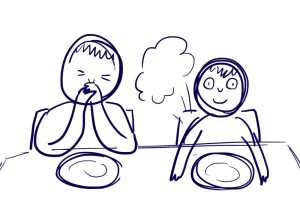 If the Guinness Book of Records measured farts, I’m sure he’d be an equal match for the fattest, ugliest, haggis-chomping, whiskey-glugging Highlander. Not only am I the only girl in the house (apart from our ginger cat), I am surrounded by farters on all sides and I would consider it a rare thing indeed to go through an entire day without smelling a single baff. It’s got to a point now where I can even identify the source of the fart: like sniffing perfume or expertly tasting wine. Each member of the household has their own unmistakable hallmarks when it comes to farting.

The old adage, “If you can’t beat ’em, join ’em” comes to mind, so after initially pooh-poohing (pun intended) the idea of farting, I relunctancly agreed to join their ranks. I am in the “loud but proud” category, which means I make a big noise, but not much of a stink. In fact, I found the whole topic so intriguing that I decided to write a book about it called The Poofiest Pong, knowing full well the appeal it would have for young children. The response so far has been great. Parents have told me how much their children have enjoyed the book and repeatedly asked to re-read it. That for me as an author is the greatest compliment of all. 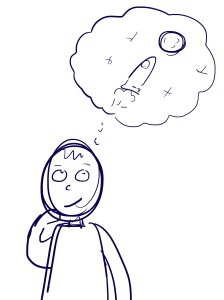 And as a friend recently pointed out to me, farts can indeed be put to good use. They are packed with methane and are a great source of energy. Think of biodigesters, where all your poo ends up and which can be used to power gas stoves. In the case of The Poofiest Pong, Max finds a much better use for his brother Billy’s pongs – they harness their explosive potential to blast off into outer space!

I must pause briefly to acknowledge the skills of London-based artist Sylvia Carrus. Her illustrations perfectly capture the spirit of the book. She got the concept straight away – and through weeks of revisions, we finally arrived at the finished product. I hope to work with her again. She is a consummate professional.

So whether you’re a shy farter who sneaks off into the next room before anybody picks up your scent like Max, whether you’re loud and proud like me or whether you’ve got nuclear explosions that proceed from your posterior like Billy, always remember these wise words: “Better in than out”. And if you want your little ones to howl with laughter, recognising their own farting styles in the book, or if you want to find out what adventure awaits the two brothers after they fly off into space, you’ll have to buy yourself a copy.