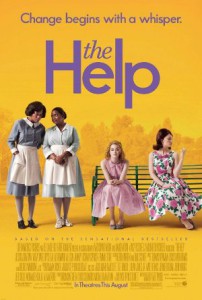 Finally, a chance to peek inside my domestic worker’s head and see what she’s really thinking about me, her strange white madam. Although hang on, it’s not South Africa we’re talking about – it’s America’s Deep South in the 1960s, when people were just waking up to the fact that smoking was bad for you and folk in Mississippi were getting all worked up about civil rights.
This is a fantastic novel – very believable – and all the more praiseworthy coming from a first-time writer. Kathryn Stockett took five years to write it and endured 60 rejections from literary agents before she made any headway with the book. It went on to become a New York Times No 1 bestseller – proof that perseverance does ultimately pay off.
Watching the film first meant I had certain faces in mind when reading the narratives of Aibeleen (the brilliantly understated Viola Davis) and firebrand Minnie (Octavia Spencer, who deserved the Oscar she won for this role). I liked the fact that Skeeter’s romance didn’t turn out all rosy at the end, but I did feel a bit let down that Celia Foote doesn’t ever seem to overcome her social-pariah status. It would have been more fulfilling as a reader to see her blossom a bit more, even if she isn’t able to have children.
I also thought Skeeter’s snap decision to relocate to New York, leaving behind her dying mother, was quite selfish. I would have liked to see more of an inner struggle or perhaps a conversation with her mother in which she gave Skeeter her blessing to move.
Despite these criticisms, it was a highly enjoyable novel and has definitely given me insight into the world of maids. I should know, I used to be one of them (well, almost – I was an au pair).