Anyone who grew up under apartheid had the misfortune of having a very slanted view of history foisted upon them. As Walter Benjamin famously put it, “History is written by the victors.” Growing up in the Eighties in South Africa, the victors of course were the National Party, so we had our fair share of Die Groot Trek, the perilous journey made by the Boers in the Cape in the early 1800s to the country’s “uninhabited” interior.

Curiously, we never studied the Anglo-Boer War, though – probably because the Nats didn’t want to draw our attention to any simmering tensions between the two white groups in SA. And we didn’t get enough of the history of the indigenous people who occupied the land long before Europeans showed up – the San (Bushmen) and KhoiKhoi, which is a pity. 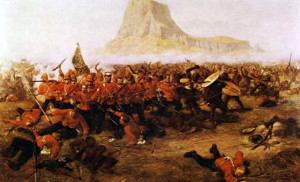 The Battle of Isandlwana by Charles Edwin Fripp

However, we did cover Shaka Zulu and the Anglo-Zulu War, which was by far my favorite part of the history curriculum. In particular, I was impressed by the battle of Isandlwana, which the Zulus won against all odds, their assegais and cow-hide shields defeating soldiers armed with rifles and defying the might of the British Empire.

I suspect that the brand of history being fed to young minds in government schools today is also biased. Now that the tables have turned, the ruling ANC will want to highlight the heroism of their banned leaders who struggled against the injustice of apartheid. Kids in high school are probably sick of “the Struggle”, just like we were of Die Groot Trek. 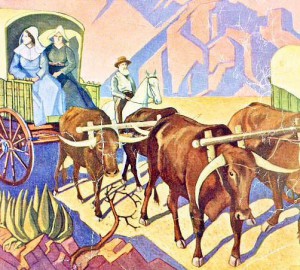 Not that I’m saying that either of these topics shouldn’t be covered in the national curriculum, but what’s important here is how history is framed. Are we seeing things from more than one perspective? Are we trying to look at the narrative of history without imposing a particular worldview on it?

I like the way veteran journalist Max du Preez sees history as storytelling. His book, Of Warriors, Lovers and Prophets makes fascinating reading. In fact, it doesn’t read like non-fiction at all. It reads like a novel. In it, you’ll find out about the first South African to travel overseas (Coree, a Khoikhoi chief from the Cape who visited London in 1613, even attending one of Shakespeare’s plays – imagine that!), how the San formed a “pact” with lions to avoid being eaten and how many of the predictions by the Boer Nostradamus, Siener van Rensburg, came true. 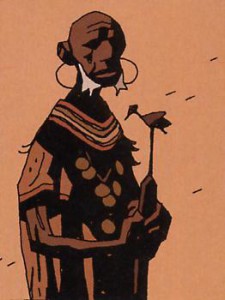 But the story I liked the most was about the African Socrates, Mohlomi, meaning “the founder” or “builder” in seSotho. This was one of the areas of history that was completely neglected in my schooling – we never learnt anything about the Sothos or their great chief, Moshoeshoe. I had to do my own research of their history when writing my book about a magical Basotho pony, Moonshine.

But coming back to Mohlomi or the African Socrates, as Du Preez calls him. He was born in 1720 and was known as a great philosopher, prophet and healer. “Towards the end of his life he instructed and anointed a young man who would later change the face of South Africa through his wisdom, diplomacy and extraordinary nation-building,” writes Du Preez. That man, of course, was Moshoeshoe, the founder of the Basotho nation.

As a young man, Mohlomi had a vision in which he was instructed to “rule by love and wisdom and look on his people as men and brothers”. He went on to become a respected chief who spent much of his time travelling, healing and counselling people. In many ways, Mohlomi was a kind of Gandhi, exercising great self-control and enjoying philosophical pursuits. He believed that conscience was man’s only guide: “Conscience is the faithful monitor of man; she invariably shows him what is his duty,” he reportedly said.

But perhaps Mohlomi’s greatest achievement was the positive influence he had on Moshoeshoe, who regarded him as his mentor. When Moshoeshoe was first brought to Mohlomi, he was a troubled teenager, angry and aggressive. He had a burning desire to be a powerful chief and thought the best way to rule people was by fear. Mohlomi gently corrected him, saying, “A chief becomes and remains a chief only by the people’s will, recognition and support.” 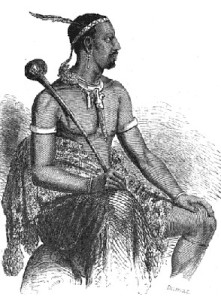 Over the next three days, Mohlomi counselled the young Moshoeshoe, sharing his personal philosophy with him. Finally, as he bid the teenager farewell, Mohlomi prophesied over him, declaring that Moshoeshoe would indeed become a great ruler and urging him to rule justly and be a friend and helper of those in need. “The land you shall rule should be a home to travellers and fugitives,” he said to his protegee.

Little did Mohlomi know how his prediction would come true. From 1820 onwards, the Lifiqane (in seSotho) or Mfecane (in Nguni languages) began, the great upheavel that resulted from clans fleeing the onslaught of the Zulus led by Shaka. “If [Moshoeshoe] had not stabilised central South Africa at that time of war and misery, the country’s history would probably have been a lot different – and more violent,” writes Du Preez in his book. “He could quite rightly be called the Nelson Mandela of the 19th century.”

This story left me inspired to unearth more gems in our country’s past. As a fellow writer recently remarked, there are so many stories in South Africa begging to be told, we can’t just sit back and wait for foreigners to pick them up. We need to tell them ourselves. Realizing that these stories are more fascinating than any TV mini-series will go a long way to helping us look at history in a new light.