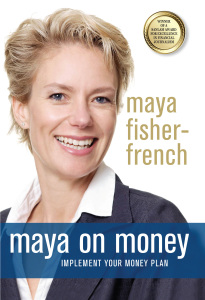 You’ve got to admire Maya Fisher-French. She gave up a lucrative career as a stockbroker to write about personal finance instead. It’s a topic that’s close to her heart, as you discover when you read her newly-launched book, Maya on Money, published by Tafelberg. As she says in the foreword, “How does [trading shares] pay off your debt or pay for your kids’ education? What really matters is how we handle our money on a daily basis.” And she has reason for feeling the way she does: at the tender age of 16, she lost of her father, leaving her mother to fend for herself and look after her children, as well as face a mountain of unpaid bills.

Just like her columns in the weekly newspaper City Press, Maya’s style of writing is conversational and easy to follow. No complicated jargon here, just lots of common sense. What I like about this book is that she doesn’t advocate a “one size fits all” approach. She recognises that some people are self-employed or don’t earn a fixed income. She’s open to the possibility that insuring all the contents of your house may be a waste of money. But she is conservative and realistic – as all seasoned financial advisors should be – and this means that the advice you’re getting is very good indeed.

The book is organised into seven broad themes: budgeting; saving, which includes having a “rainy day” or emergency fund; growing, which deals with investing; raising, which covers raising financially savvy children, spending (most of us are pretty good at this part! Although here she is really emphasising how to spend wisely and be clever with credit); protecting, dealing with insurance; and lastly, preparing, which covers your retirement plans.

Of course, nothing is stopping you from reading the book in any order you choose, which is one of its chief attractions. If something catches your eye, like “Can I afford to buy a house?”, you can skip ahead to that section. You can dip in anywhere you like and take out whatever nuggets you find useful. But obviously if you want to get a holistic sense of where you are financially, it’s probably a good idea to read the book from cover to cover.

Maya clearly knows her audience well: having corresponded with her Mail & Guardian and City Press readers for ten years, she knows the financial predicaments of South Africans from all walks of life: people who wonder whether they should inform the bank that their spouse has lost his job or not, husbands who dread telling their wives that they don’t have enough money to retire comfortably.

And while she is for the most part empathetic, there are times she can be she can be quite tongue-in-cheek, like in the foreword: “On my website Mayaonmoney.co.za, the two phrases that people search for most often are ‘forex trading’ and ‘debt consolidation’. This so accurately reflects the mindset of so many people – mismanaging their basic day-to-day finances and then hoping to solve their money issues through risky investments.”

As a parent, the part you might find most interesting is raising children who can manage their money well. Maya mentions an incident with her son, aged six at the time, who was convinced his parents were poor because his father was between jobs and she kept saying “We can’t afford this” and “We don’t have money for that”.

Maya had to sit him down one day and explain that they had lots of piles of money – some were for everyday expenses and some were saved up for when they were older. Just because they didn’t have money to buy toys from the daily expenditure budget didn’t mean they were poor. She even went so far as to show her son her bank and investment statements to prove it.

But she does admit she learnt a lesson that day: “Never tell your kids you don’t have money – rather say you don’t want to spend money on that as you are putting money away for other things. If you can’t afford to buy something that they want, encourage them to save up for it themselves.”

The strategy Maya suggests adopting towards your finances isn’t new: it’s what wise people have been doing for centuries. Save, be careful, set money aside for a rainy day, follow a budget, keep tabs on your spending. What makes this book different from others is that it’s specifically geared for South African readers, including comparisons of the services offered by major banks, it’s unbiased (she turned down sponsorship opportunities to keep it that way) and it’s very up to date.

If your finances are making you worried, you want to do something about it but aren’t sure what, this book is a must read. It will empower you to take ownership of your finances and proactively manage them. Viva a financially sound future, viva!

Published by Tafelberg, Maya on Money is available at most book stores at a retail price of R195.