The Rhodes Less Travelled By 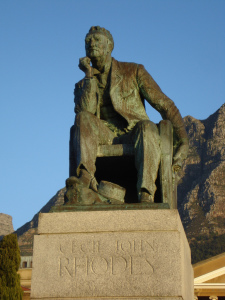 Should he stay or should he go now? Photo: Ian Barbour, flickr.com

I remember my disquiet as I walked past the statue of Rhodes at the University of Cape Town for the first time. It was in 2003 when I was doing a postgraduate course to become a primary school teacher. Perhaps it was my Afrikaner blood coming to the fore and boiling a little. I did think, “Jislaaik! This is a flipping big statue to a man with such a questionable reputation.” Yes, the man was certainly great (whether for his good or bad deeds, he undoubtedly was a force to be reckoned with), but it is the situation of the statue – so central on the campus – and the fact that it towers down over the students who clamber up and down the stone steps around it, that really strikes you.

In fact, it’s quite unlike the statue of Rhodes in the Company Gardens which is quite puny by comparison. That statue is almost lost in a beautiful garden setting, you stare up at it, if you want to – or otherwise you’d most likely just walk past it without even a glance in its direction. No one is throwing excrement at that statue of Rhodes and demanding its removal – it is too seemingly insignificant for anyone to have noticed it, except the pigeons who for their own reasons have covered it with poo – but of course the one at UCT is a huge bone of contention.
No doubt you’ve read all about how fiercely black students are opposing that statue’s right to exist – and they do have a valid point. Even Max Price, the university’s vice-chancellor, acknowledges that the statue is not mediated by its surroundings in order for people to properly make sense of it. In a recent article in People’s Post, he says, “Many have noted that as it currently stands, the statue of Rhodes is unmediated by any critical commentary or historical contextualising. There is nothing to suggest to any passerby how the university situates itself in relation to Rhodes’ actions and their impact. At the very least, we need to engage with that.”

A little higher up Table Mountain, you have a memorial set aside to honour Rhodes, Rhodes Memorial, favourite spot for group gatherings, picnickers and wedding couples having their photos taken. This memorial, with its lion sentries guarding a path of giant steps up to a covered colonnade, is a lot more sensitively handled. There is a statue of a boy on a horse entitled Energy, expressing the abundance of that quality which Rhodes possessed, and again, it is not offensive at all. You are afforded an amazing panoramic view of the city and the fact that Rhodes donated the vast tract of land around the mountain, which is why you are able to stand there and have an enjoyable picnic, is hardly noticable at all. 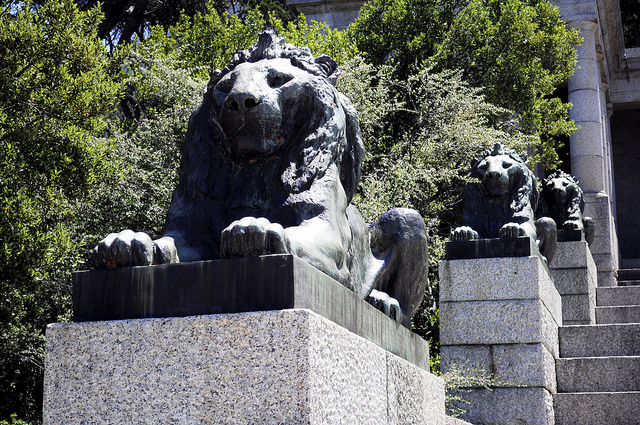 And let’s just give the man a tiny bit of credit – he did do some good for the country. He was not a saint, not by a long shot, he did fund and organise the disastrous Jameson Raid which tried to unseat President Kruger in the Transvaal, he also robbed the Ndebele chief Lobengula of his land (which I think is his worst crime), and he was a firm believer in the Machiavellian view that the ends justify the means, which of course is problematic. (For more about Rhodes, read the insightful book Diamonds, Gold and War by Martin Meredith.) But he was quite generous in his will, which is why the president is able to live at Groote Schuur (when he’s not at Nkandla, that is), why universities like UCT and Rhodes exist at all, why men like Bill Clinton were educated at Oxford University thanks to his scholarships. But he is a symbol of colonialism, there is no two ways about it. It was an ideal that he cherished, which today is completely reprehensible to most of the population, which is why UCT student Chumani Maxwele felt compelled to douse his statue in rather runny-looking faeces.

I don’t think we can erase the past. The past is ugly, it is difficult, there are bits that I wish I didn’t have to tell my children about – like the way the Khoi and San were treated, why innocent people had their farms destroyed and watched their children die in Boer concentration camps, why poor Cetswayo had to end up in Valkenburg after leading his proud nation in a war against the British that he never wanted to fight. History is full of tragedy, irony and bittersweet moments. And it’s impossible to judge someone based on the prevailing worldview of our current generation – that of democracy and secular humanism – when they subscribed to something that we cannot comprehend today.

Why would a soggy little island off the coastline of Europe want to take over the world and paint it red? Beats me. But that is what people like Rhodes believed, that is why wars were waged and rebellions quelled, why so many people in South Africa, India and elsewhere lost their lives. Today we look back on it and wonder why on earth it happened in the first place. I think Arts and Culture Minister Nathi Mthethwa sums it up well when he says (quoting an article in the Cape Times): “South Africa belongs to all who live in it, united in our diversity. The government’s attitude and policy to all heritage sites – including statues of former imperialists like Cecil John Rhodes – is based on a national policy of reconciliation, nation-building and social cohesion … As a government that promotes a transformative national agenda, we also accept that the past cannot and should not be completely wiped out.”

When I was at Rhodes University in the late 1990s (now I’m showing my age!), there was a campaign to have the university renamed, so this movement to bring about transformation at universities is nothing new. The name that was put forward as a replacement was Ruth First – Ruth First University, which has quite a nice ring to it. I liked the fact that a woman was being honoured – I can’t think of any SA universities named after the fairer sex. But of course Ruth First herself was a deeply flawed individual, utterly devoted to her cause, which was communism, but rather lacking in the mother and good wife department, if you’ve read her daughter’s autobiography.

In the final analysis, every man or woman will fall desperately short of the traits needed to make him or her truly great and worthy of respect. Whether the statue of Rhodes should be removed or not is still up for debate. My own personal view is to get rid of it (anybody need a large doorstop?) and place something symbolic there instead, perhaps commission a local artist to do a statue called “Reconciliation” or “Freedom” or “Hope”. While human fraility remains, these qualities at least will endure.