Contemplations on my own mortality

“We’ll be back at lunchtime,” I confidently told Leekwin, the goat herder who opened the gate for us as we left the farm we were staying in Kamieskroon.

I mean, how far could it be from Kamieskroon to Stofvlei, the farm of my great-grandparents in Boesmanland? The map Oom Corneels, the 90-year-old farmer gave us yesterday, showed how close together everything was. We just had to head up to Garies (pronounced with a normal “g”, not a rolling one) and then down to Kliprand before turning left to join the road heading up to Poffadder. It was 9.30am. There was no need for sandwiches or a flask of tea, as my husband had suggested. We’d be back by 12.30pm, I was sure of it. 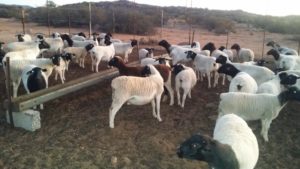 Writing about the farm my two aunts grew up on had long been a dream of mine. But I realised as I began to write that I lacked authority about the nature of the landscape. Geography – where a book is situated – informs so much about the story. I couldn’t just ignore the fact that I’d never been to Boesmanland. I had to get there. So we left our three children behind with understanding grandparents and headed north on the N7, where we overnighted on a sheep farm in Kamieskroon.

The next day, our real adventure began. Leliefontein, the first stop on our journey, was fairly uneventful. We stopped to ask a local for directions (not the man who “het met twee spore getrap” – blindly drunk outside the liquor store). Our next stop was Paulshoek, a small hamlet where we passed another store and then proceeded to get truly lost. There were lots of gates that needed to be opened and shut. And there was nobody about, despite us seeing signs of human and animal habitation. At one seemingly uninhabited farm, the sound of the windmill going clack, clack, clack was the only sound to break the silence.

The landscape was littered with large boulders. Gavin nicknamed it Rockville. It looked like a pair of giants had had a contest to see how many rocks they could throw at each other. Eventually the dirt road lead to another unoccupied farmstead, so we turned around and retraced our footsteps. It was now 1pm – past lunchtime, and we were no closer to our destination. 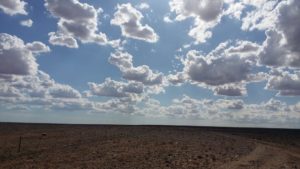 Now my thoughts – a few hours earlier so cheerful – took a more morbid turn. If we punctured our wheel or broke down on the side of the road, what would we do? There was no cellphone reception out here. Neither did there appear to be anyone around. (We had knocked on farm labourers’ doors and nobody was at home.) Our food (a few crackers and biscuits) and water (two small bottles) was not likely to last that long. It would be days before anybody found us. We had only seen one other car in the three hours that we’d been driving.

At the store in Paulshoek, we stopped for directions. Two men jostled for the privilege. Eventually I was told by the winning man who pushed his rival aside how to get back on the right road: “Left at the first T-junction, then right at the next.” When I repeated his instructions, he made up a little dance, pumping his fists up and down in the air like pistons: “Left, right, left, right, left, right.”

He inquired for me at the shop about water. The blue-eyed woman behind the counter said they didn’t sell any (or any healthy food either), but she kindly gave us a bottle of 2-litre Coke which was filled with fridge water. Drinking its icy contents was delicious. We handed our friendly guide a R10 tip and set off again. 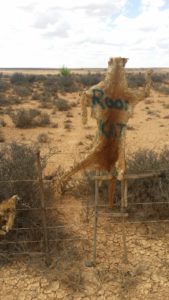 Now we were on the right road. We headed towards Kliprand and then turned left onto the R358 to Pofadder. According to Gavin’s calculations, Stofvlei was meant to be on the side of this road – either to the left or right, we weren’t sure. There were not many signs to mark the way. We passed a horrible sight – dead animal skins pinned up onto a barbed wire fence. We stopped to look. One of the pelts had “rooikat” scrawled on it. Who would do such a barbaric thing? But then again, in a place like this, you probably couldn’t afford to not like such people. They might be the only ones around to save you, I thought.

We kept going. The landscape was uniform and flat. There were no trees or koppies – just scraggly bushes, tiny succulents and grass that crunched beneath your feet. Big rain clouds stacked up in the sky. In fact, the sky dominated the landscape almost in an oppressive way. The sky occupied about 90% of your vision, the land a mere 10%. Things felt weirdly stretched out and pushed down by the weight of the sky.

Eventually we stopped at a farm called Spioenkop, named after the notable Boer victory against the English. There was nobody there – the farm was completely deserted. Inside the storeroom was an odd assortment of farm equipment. The house next door was painted an upbeat orange – perhaps before the owners had realised how tough life out here was. But eventually the dreariness of the place must have got the better of them. The veld in front was littered with bones – I couldn’t help thinking of the biblical Valley of Dry Bones – springbok and dead sheep, and behind the house a tortoise who probably died of thirst.

By now we were close to giving up. Our petrol tank gauge was pointing towards empty. I had such an overwhelming urge to get out of there – fast! But Gavin urged me to try the farm we’d seen earlier: Bovenstevlei, whose sign declared: “Bovenstevlei is not for sussies.” Here at last were signs of life – geese and dogs and sheep and farm labourers bustling about. It was a welcome sight after staring for so long at nothing. 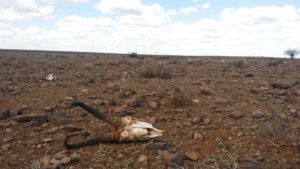 Willem Koopman the farmer complained that it had been “bitterdroog” – bitterly dry – even though it was their wet season. He said some of his sheep had died and lay buried in a shallow pit. He didn’t say much – he didn’t need to. His lined, pained face said it all. It was a hard life out here. I admired him that he kept going. He drew us a map – he knew all the farmers in the area. He said my Oupa-grootjie’s farm had been known for its “winkel” (shop). It must have been a hive of activity in the 1930s and 40s. I asked him about the rooikatte. “Ons jaag hulle (We hunt them),” he responded. And yes – it was he who had pinned their skins up on the barbed wire fence.

In fact, that was where we now needed to turn right. About 20km down this road, we stopped. We saw the small cement-brick house where my Ouma and Oupa once lived (he owned the winkel) together with my aunts. The house was now being used to store the feed for the sheep. We roamed the rooms. I tried to picture what had gone on in these rooms. The floor plan was slightly different from the way my aunt had described it. Was this really Stofvlei? 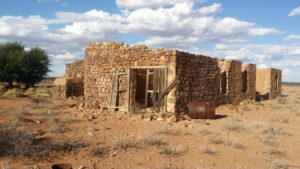 A few metres behind this house we found the homestead where my Ouma- and Oupagrootjie had lived. It had double walls – stone on the outside and clay bricks on the inside. Gavin guessed the farm school was the outer room that looked like it had been added on later. The inside/outside stove was clearly visible – my other aunt had mentioned it – and we discovered an AGA-type stove in the kitchen alongside it, covered in crumbling clay bricks.

It was strange walking through the ruins of the house – the roof was completely missing – and imagining what each room was used for. It must have been quite a grand and imposing house in its time. I thought of all the children from the outlying farms who stayed here during term time so that they could go to school. Ouma-grootjie must have been kept busy in the kitchen with the servants preparing meals for them every day. 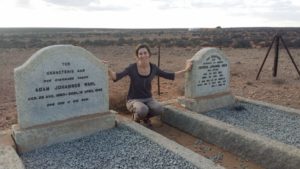 I confess it was only when we went to the graveyard that I finally believed that this was Stofvlei. Up till then I’d had my doubts. But when I saw the two white headstones with Adam Johannes Wahl and Gerrida Wahl née Kotze, there could be no disputing it. This is where they had lived from just after the end of the Anglo-Boer War until they died in the 1950s.

We stood in silence watching the sun sinking over the western horizon. I was suddenly overcome with emotion. I thought of all the times I’d complained and cried out to God, saying my life was too difficult. Yet I had no idea what hardship was, how inexpressibly tough it must have been for Johnny and Gerrida Wahl. They had built the farmhouse from old stones and clay they’d found in the area. They had carved out an existence in such a hostile environment. This place that I couldn’t bear being in for more than a few hours, this place they had called home for 50 years. They had not only survived, but thrived, building a farm school and establishing a shop that serviced farmers for miles around.

For a few minutes I felt the force of my Oupa and Oumagrootjie’s determination and courage. I, the city slicker who couldn’t wait to rush back to civilisation, felt humbled by it. I was reminded of God’s promise to Moses when he encountered the burning bush: “I am the God of Abraham, Isaac and Jacob”, a multi-generational God. And of God’s promise to Joshua: “As I was with Moses, so I will be with you.”

I’d like to think something of their stubborn resilience lives on in me. And I will never forget Boesmanland, although I’m in no hurry to go back.