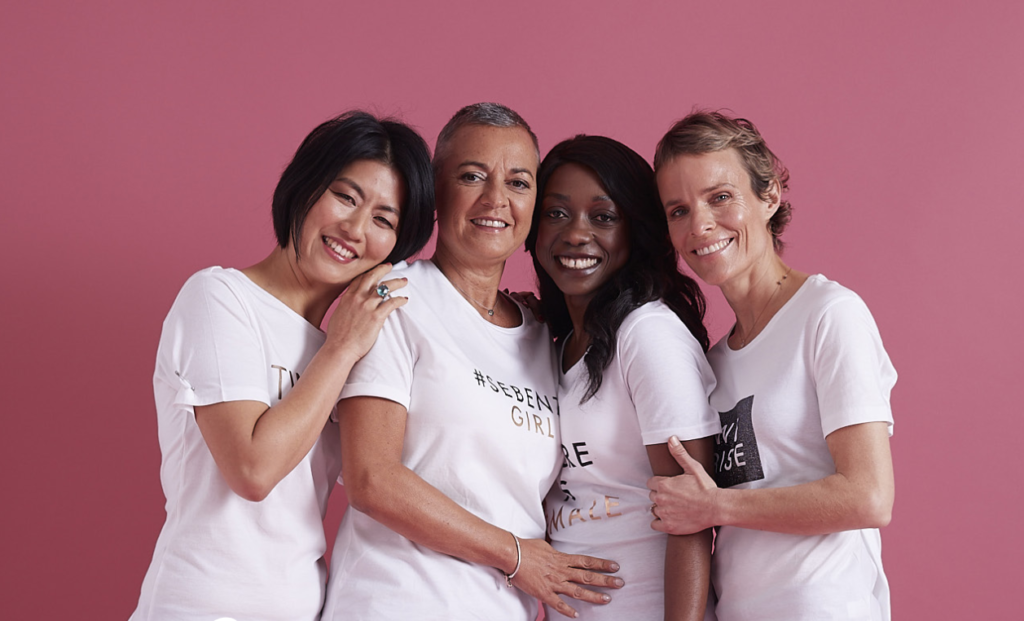 ‘Thank you, cancer, for transforming my life’

In July 2017, I was in the kitchen making supper. I heard this insistent voice in my head, ‘Sarah, check your breasts.’ Later I lay on my bed and felt my left breast was lumpier than my right one.

The doctor said my breasts were typical for post-lactation. She did a needle biopsy and phoned me with the results. ‘Everything’s fine,’ she said. But somehow I knew she’d missed it.

I went back and saw a different doctor. Her reaction was much more dramatic. She wanted me to go for an ultrasound, a mammogram and a core biopsy. The biopsy showed that I had Stage 0 cancer, which the doctor said was very good news, but I was shocked.

When I saw the surgeon, he suggested I have a double mastectomy. ‘Why have one 16-year-old boob and one 40-year-old one?’ he said. I was sad at the thought of losing my breasts, but I felt they’d done their duty and it was time to let them go.

When they analysed the tissue after the op, they found two small tumours in my left breast and two lymph nodes that were cancerous. They now realised I was not pre-cancerous at all; I was in Stage 2 cancer. I needed the full treatment: five months of chemo, five weeks of radiation and 10 years of hormone therapy.

This is when the fear really hit me. I had a four-year-old son and a 18-month-old baby. I thought, I’m going to die and my boys are going to lose their mom. Everyone was bombarding me with advice and saying, Do this, do that. But I realised I just had to take one step at a time and trust the doctors.

Chemo was harsh. I lost my hair. I dropped to 44kg. I was stripped of my womanhood and my external beauty. I wore scarves, earrings and dresses to feel more feminine.

I asked myself, What has caused this cancer? I analysed my diet and cut out sugar, dairy and preservatives from my diet. It was a complete detox. I also switched to natural, organic cleaning and beauty products.

On an emotional level, I realised there was a lot of unresolved fear and guilt in my life. There was also stress about money. All these negative emotions were now manifesting in my body. I needed deep emotional healing and forgiveness to be free of them.

Cancer made me realise I needed to transform my life. It gave me a big kick in the butt. I realised I needed to love myself more. The disease has transformed me because before, it was all about my children. But now I know you need to be strong and love yourself as much as you love others.

‘It’s not a death sentence’

In June, I noticed a lump above my left breast. My gynae sent me to have a mammogram and ultrasound, both of which were clear. The radiologist suggested I have a biopsy too. I was unsure, but my friend said just do it anyway. Five days later I was told there were micro-cancerous cells in the lump. I had Stage 1 breast cancer. It was scary.

There were a lot of tears initially. I was angry with life and with God. It felt as if I’d lost control. My surgeon gave me a book, <Italics>Be a Survivor: Your Guide to Breast Cancer Treatment<Italics end> by Vladimir Lange, MD. It left me feeling very positive. I thought, I have two options: I can throw a pity party or I can remind myself that life must continue. I chose the latter.

We scheduled surgery straight away and the lump was removed. I had a three-week break and then started six sessions of treatment. My last treatment is on 18 October. After that, I’ll do radiation for four weeks until the end of November. I feel very lucky that we caught it so early.

In the beginning, it felt like a dirty little secret. I told my core friends and family. Then I decided to be more open about it. Everyone knows now that the lump was removed and treatment has begun. People don’t need to tiptoe around me or feel uncomfortable when I mention cancer.

My motto is, ‘While I breathe, I hope.’ Cancer’s not a death sentence. Being a Christian, hope and faith are big aspects of this journey.

My employer is very supportive. I still go to gym. I don’t wait for side-effects to hit me. I live my life as normal. I’ve booked a holiday in Mozambique when my treatment is over and I might even lose a bit of weight, so I will definitely be bikini-ready!

‘Understand things from a medical perspective’

It all happened so quickly. On Saturday my husband picked up the lump, on Monday I had the mammogram, on Tuesday I had the fine-needle biopsy and on Friday I had surgery to remove the lump. Because the cancer was a little bit aggressive, the doctor decided to go ahead with chemo after the op.

That was my intro to breast cancer. Thankfully they caught it early at Stage 1B. I found the website breastcancer.org very helpful because it helps you to know what your options are and what the side-effects are likely to be.

For six months, I had chemo, which included the red devil and Herceptin, and then for six weeks, I had radiation. I was meant to have five years of hormone therapy to stop the cancer coming back, but it got cut short to two years because I wanted to fall pregnant.

The chemo was intravenous. I wouldn’t wish it on my worst enemy. Once they burnt a vein giving it to me. My immune system felt compromised. Having a baby at the same time was tough. My mother-in-law came to stay with us during the week. We didn’t have to worry about meals. Our friends did that for us. I honestly couldn’t have done it without the support of my friends and family. I knew I had to get through it for my daughter Quill.

I’m happy to say I’m now cancer-free. Once you’re clear, you need to go for annual checkups with the oncologist, which includes mammograms.

The most important thing is to have a fighting spirit. Surround yourself with friends and family who love you. Let them know that you need time and space to process the diagnosis, but also lean into them for support. Understand things from a medical perspective and don’t read horror stories.

Two years ago, I felt a discomfort at night in my chest. I went to the gynae and she recommended going for a mammogram. The tumour was hidden behind my sternum. The doctor said it had probably been there for nine years, around the time my son was born.

I was diagnosed with Stage 4 breast cancer. It was metastatic, meaning it had already spread to the bone. They removed the primary tumour and my left breast. But there were cancerous lesions in my ribs, spine, hips and neck.

The treatment will continue for the rest of my life. I will never be able to say I’m cancer-free. Some areas of my body are reacting well to the treatment; others aren’t. Every four to five months, the doctors need to change the treatment as my body becomes immune to the drugs.

I was four months into my second marriage when I was diagnosed. My husband left me a week before my mastectomy. Maybe the chemo made me grumpy, but he said it wasn’t what he signed up for. I felt let down that he couldn’t support me when I needed him most. Whatever happened to ‘in sickness and in health’?

As my family lives in Portugal, it was my friends who brought me meals. I never asked, ‘Why me?’ I thought, Why not? I believe I can use my influence to help others.

I’m asked to do motivational talks and I often tell the audience, ‘Don’t wait to be told you’re dying to start living.’ My motto is to carry on living my life. I’m not going to wait till I retire any more to go travelling. My faith as a Christian keeps me going.

My goal now is to raise awareness of the disease. In January 2019, I am hoping to swim from Robben Island to Big Bay to raise money for Pink Drive, who are sponsoring the boat which will accompany me. Most days I get into the pool or the sea to train.

The basic message of Pink Drive is, ‘Early detection saves lives.’ I was always afraid of having a mammogram because I’d heard horror stories of how painful they were. If I’d only gone for one when I was in my early 40s, I would have been able to detect the cancer at a much earlier stage.

This article first appeared in the October 2018 issue of the Foschini ClubCard magazine.