“Oh, your book launches looked so successful!” enthused a writer friend after the publication of my latest children’s picture book, The Curry Giants.* 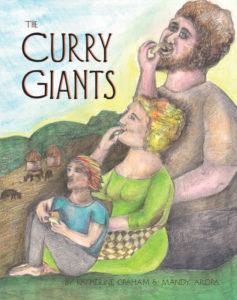 “Thanks!” I said. Should I qualify what “successful” meant? Surely it was not the number of books sold. At the first book launch at Exclusive Books Cavendish in June, I sold a grand total of five books. I even made it to the “bestseller” list for kids’ books that week! At the Meadowridge Library two weeks later, the book sales were no less impressive – two. I spotted a father with his two sons before the reading began and tried to coax him and his kids into joining. The look on his face said one thing – fear. South Africa was about to ramp up from Alert Level 3 to 4. It was clearly not the time to get friendly with strangers.

Later I was pleased to recognise an adoptive mom I knew wandering about the children’s library. Surely she would like to buy a book for one of her sons? They both fell into the right target market for the book. Nope – she shrank away as I handed her the book as if it were contaminated. Perhaps I should have sprayed sanitiser on my hands first? The do’s and don’ts of Covid-era book launches are not always easy to fathom. 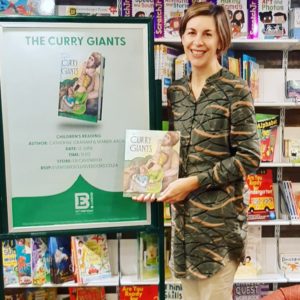 But it’s not all bad. There were wonderful moments, too. Just having the launch at Exclusive Books has been a long cherished dream of mine. A huge shout out to Linda McCullough and her team! It was so special having family and friends gathered at the cosy children’s corner in Cavendish Square. I will never forget the illustrator Mandy Arora with her entourage of fans: her three burly sons, her sister and her mum. (Her sister did a very good job of stirring the curry potjie pot during the story’s enactment!) And I loved how my dad stole a furtive photo of me in full flight as I read the story out loud to the children. “It was nice to see you in action,” he confessed at the end. Even my mother-in-law cut short her normal Saturday morning walk with friends to pop by and a good church friend bought a copy as a birthday present.

Sipping tea on the Titanic

Then of course there was the celebratory tea we had after the Meadowridge Library book launch. Sharon Swanepoel, the amazing children’s librarian there, joined Mandy, fellow illustrator Katinka Joubert, my friend Vikki Draper and me as we sipped tea and ate crumpets. The grip of lockdown may have been tightening, but we were not going to let it bother us – not in the least. Like the musicians on the Titanic, we would play our instruments as the ship went down, which so far, thank heavens, it hasn’t. 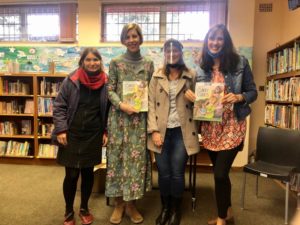 I suppose book launches in the time of Covid aren’t that bad, after all. Not if they mean friends and family braving the virus-infested world to support you. So far, I’ve sold just over 60 books – my first box of books is gone! The subsequent readings I did at Cape Town schools really helped. Just launching a book during a pandemic, I think, is a feat in itself.

*The Curry Giants was made possible by the generosity of the National Library Library of South Africa‘s Community Publishing Grant. It tells the story of a family of giants in KwaZulu-Natal whose hunger for curry soon lands them in trouble with the local chief. But it is their love for curry which ends up saving the day when a fire-breathing dragon threatens the entire village. The book sells at R150 and can be ordered directly from the author.